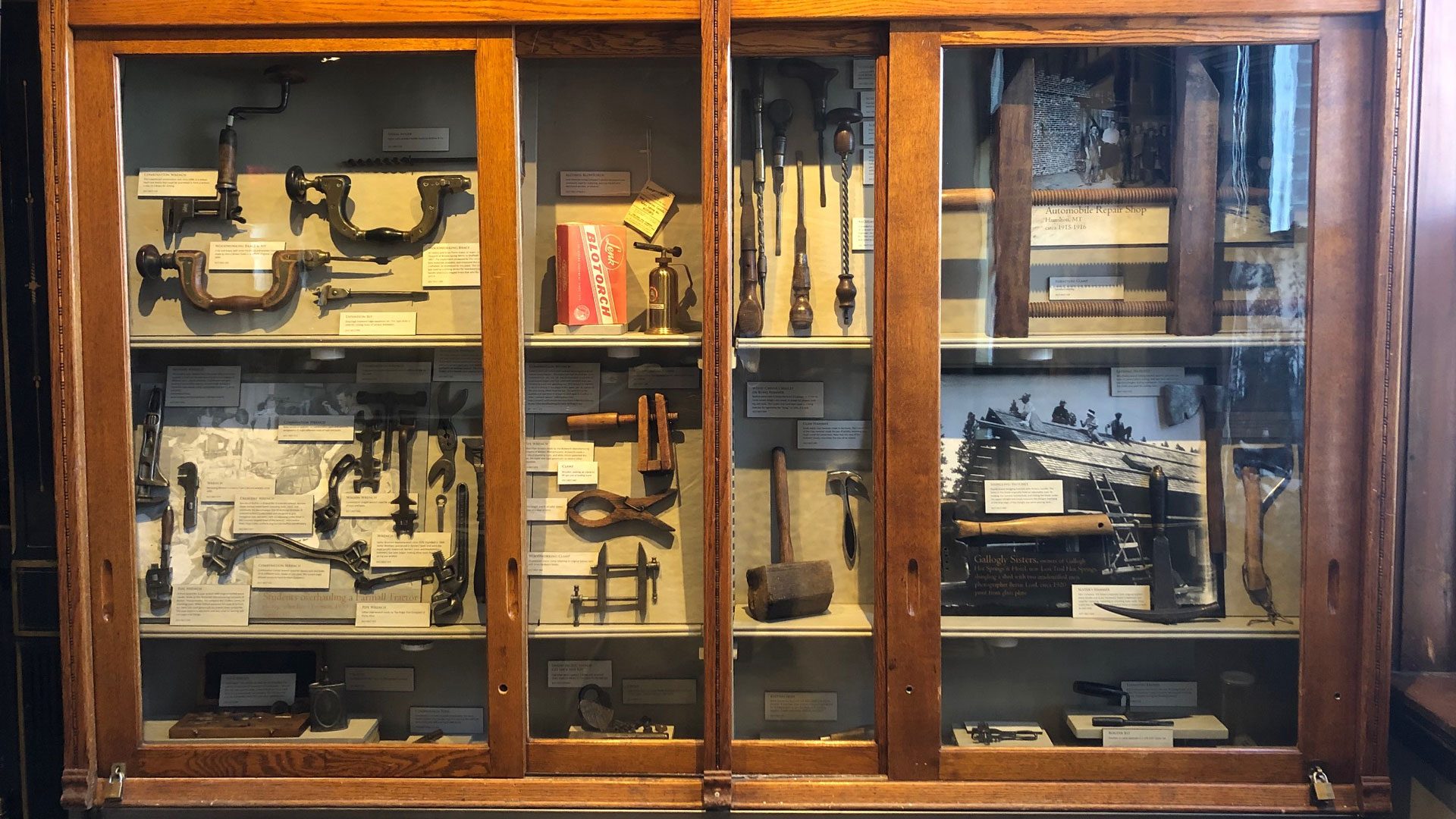 Thank you to our supporters:
The Rapp Family Foundation,
Humanities Montana,
the Jane S. Heman Foundation
and individual donors.
The Virtual Exhibit will have

Jane Cron’s antique tool collection began with the simple thought that she would like a buck saw. Bob and Jane Cron met in college, which was not only the beginning of 54 years of marriage, but of many adventures and much collecting. Because of Bob’s long career in the U.S. Forest Service, Jane thought it would be “cool” to hang a bucksaw on the wall to represent those early years at Oregon State University. It was there he would participate in forestry skill competitions, such as single- and double-bucking, axe throwing, and burling (standing on a log while rolling it in the water).

At one point, the couple was transferred to Washington, D.C. The first year there, they vacationed in Vermont for a week and found that perfect buck saw at an old barn antique store. But once it was hung on the wall of their Virginia home, Jane says, “It looked really dumb!” She decided that what it really needed was some company.  And so their interest in collecting tools began.

Their friendship with another Forest Service couple, who liked to look for antique oak furniture, led to many weekends searching for treasures in small towns from Maine to Florida. Jane estimates they found two-thirds of the collection in the eastern United States. The rest of the tools were collected in Montana, Colorado, Utah, Alaska and Texas. As the collection grew, Jane said that Bob began collecting postal scales – in self-defense!

Many of the tools they found were in very poor condition. Some came from antique stores, but thrift stores, garage sales, and huge flea markets were also important sources. Quite a few were gifted by friends and family. Bob became a master of cleaning and restoring the often long-neglected tools, often making “silk purses out of sow’s ears,” Jane said.

Jane’s one rule for collecting was that she had to at least have a basic understanding of how a tool worked. She became fascinated with the beauty of the various woods, the brass, and the ingenuity people used in creating tools for specific tasks. Plow planes, combination planes, double-edged planes, rabbet planes and jack planes were so varied, and each was unique. Further criteria Jane used in selecting the various tools were simple. “I had to be fascinated with the design, beauty, or workmanship of the tool,” she said. One very ordinary wood clamp had been made from two different kinds of wood and was beautifully dovetailed together, creating something special. “I never bought something because it would increase in value,” she said. “When one thinks about how hard it was in the 1800’s and the early 1900’s to just live… and the tools that they invented to ease their workload are impressive, beautiful, and functional.”

The tools became Jane’s artwork and were displayed in groupings on walls and in display cabinets. The butter beater was used as an end table, and the wood bushel measure held a silk plant. Bob became her master designer and was in charge of arranging the various pieces on the walls, while Jane was the arranger-in-chief for two glass-shelved display cases.

Jane said she was really pleased that the Ravalli County Museum was interested in her tools. “They have put so much effort in additional research and taken special care during the whole process,” she said. “It will ensure that these artifacts will be around for a long time to come. It will show both kids and grownups how these were used in the lives of those long gone and maybe help us remember our own ancestors and the difficulties they faced.”